Obviously we're no longer at the beach. We actually left the day after the last post, but we've been on the move or in places we didn't want it to be common knowledge we were in since we left, so I apologize for the lack of updates. We've visited Melbourne during our little stint of radio silence, because the days are getting awful cold all of a sudden ("that would be Autumn", shouts Drew from the bathroom as I read this back) and we needed to replace some old clothes so we don't, you know, freeze. All in all it was a pretty good trip, considering the fact there are 'old friends' of Drew's living there more or less permanently.

The only problem was the fact Myer is filled - and I do mean filled - with faceless white manikins, a good portion of which are wearing suits. Because, you know, faceless dudes in suits are in right now. Drew, of course, found the whole thing to be hilarious, but I am literally never shopping there again unless my life depends on it. I think I jumped every time I turned around, and it wasn't so much scary or horrifying as it was just plain annoying after the third or fourth time.

But apart from that, we're not doing a lot except driving somewhere I won't mention so we're not ambushed once we get there, in the vain hope we will be able to replenish our dwindling cash once we do. We're down to what we have left in our wallets, which is admittedly more than I'd usually carry in my wallet but at the same time not enough to survive for all that long. Well, I'm driving, all Andrew is doing is making mess in every hotel room we find on the way. 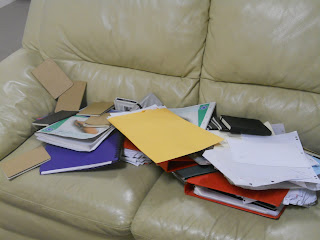 Case in point. He took this yesterday, when I told him to start packing up so we could leave, which I suspect is the only reason you get to see it because he immediately decided he needed to take photos so the internet could also know how much crap he's compiled on the job over the years. He then spent the next ten minutes artfully arranging his shit so it would look good but still have that 'authentic messiness' to it, all the while conveniently preventing himself from doing any actual packing and still allowing him to keep reading while he did it. Also he may have wanted me to omit that fact, but he wasn't forcibly elected to the position of sole blog poster so he's just going to have to deal with me undermining every attempt of his to impress you lot from now on.

But yeah. That's basically all Drew's been doing since the incident, for anybody curious as to how you go about spending your time when you're not supposed to be lifting anything heavier than a page lest your tear out a stitch. I get to do all the heavy lifting, and the driving, and the packing, and I don't see him volunteering for Laundromat duty anytime soon either, so I'll probably end up doing that, too. Although I suppose that's better than having to help him wash himself. Thank god for waterproof bandage guards, is all I can say.
Posted by Andrew at 10:28 PM