I meet him behind the hotel at ten in the morning. Ben is fast asleep in the room and won't be up until sometime after twelve, so we're sure we won't be interrupted. It is difficult to look at his face, or it is difficult to remember looking at his face, but he's wearing that red hoodie and that smirk so it must be him. I ask him how Robert's doing just for kicks, and he sneers at me like I've insulting him. The New Girl is with him, ten steps back leaning against an obviously stolen car (it's missing the front right hand side window) and smoking a cigarette.

It's funny how nothing but a bit of tobacco and about six thousand poisonous additives can make someone so much less attractive. She refuses to acknowledge me when I say hi, but that's kind of what I expected.

"Information and skills." He says, like there's a whole list of places he needs to be today and I'm a very small but necessary interruption to his plans. It's obvious what he's doing, trying to dominate the meeting and make out like he's in charge to extract more information from me, so I just ignore him and start talking at the New Girl.

"How've you been?" She ignores me, so I decide to poke. "Writing in agony each time He visits?" She laughs quietly and takes another drag, before throwing the spare keys to Ben's car over her shoulder where he catches them, then sneering haughtily at me and leaving.

He's smiling now, like there's a huge secret I'm not privy to, as he plays with the keys in his hands.

"Information and skills, Andrew. You get your keys back for free as a show of good will, but I have everything the police have taken from you waiting in the boot of your young friend's newly acquired car." He gestures to the slowly retreating back of the New Girl in the distance as he mentions the car, just as she turns to cast one last look at me before disappearing around a corner. I wonder idly if they rehearsed that, so tiny a detail. "All you have to do is convince me you've got something worth it."

I show him all the notes he's quite helpfully stolen back from the police, once I root them out of all the other stuff. We spend about twenty minutes discussing several ideas I've had, and various things I've recorded or written down. I can tell he's impressed with some of the content, so I start probing him for answer of my own.

After a short pause, he glances up from a map of recorded occurrences of theopany in Australia, clearly annoyed.

"I may or may not simply be visiting Australia at this very moment. For all you know Andrew, there's only one of me, and I'm not going to be telling you otherwise since the first thing you're going to do after this is go running back to your laptop to write it all up and show everybody in a attempt to get the recognition you so desperately deserve."

"Well..." I start, about to ask him about what he (and possibly his comrades) is/are planning.

"Do you think I'm a fool? I'm only here because I have something to gain being here. You've clearly learnt a lot about our mutual employer - to borrow a term - in your time, and have countless recorded encounters with Him which provide a deep insight into how He reflects off of your psyche. Now it might all be useless drivel written by a deluded fool who only think he's sane, or it might actually contain some insight I'm not privy to..."

Clearly frustrated that I've made him explain something we both already know, he waves a rather worn exercise book filled with transcripts of 'conversations' I've had with Him and various half-sane rantings I've indulged in during the aftermath of such visitations.

We talk and talk in circles, dance around the truths we don't want to reveal and dress up the lies we'd rather the other believe. In the end the entire thing takes less than an hour, but it feels like an eternity, with how much we've discussed and how many notes I need to re-write. I return to the hotel room to find a small piece of cardboard slid under the door. 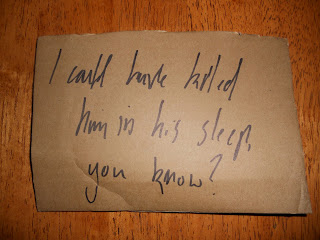 So the threats have apparently started. I should have seen this coming, really, since this is the only time I plan for us to be apart in the foreseeable future. 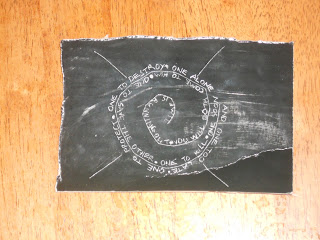 And the other side. For anyone why can't read that, it says and I quote:
Time is running out.
You will both come to Him.
One to save the other.
One to kill.
One soon.
One too late.
One to protect.
One to destroy.
One alone.
And no. I'm not particularly worried about what it says. Just an fyi for little miss newbie seeing as I know you're reading this. I figure this is your first chance at fieldwork and you obviously need the help so I'll make an exception this once and give you some pointers. This kind of shit doesn't scare me. Especially if this is the theme you're going to stick with. I'm looking foward to carrying out this whole thing out just by describing what we would've done if we could actually be bothered getting involved, so fire away. I'm a veteran of the art, baby, and you're going to have to do more than that to scare me.
And that's all I can manage, seeing as I'm falling asleep on my feet here. Whenever it is you find this Ben, please don't wake me up until I come to myself. It's hard enough getting sleep as it is.
Posted by Andrew at 6:30 PM

Email ThisBlogThis!Share to TwitterShare to FacebookShare to Pinterest
Labels: The Colleagues