You'll love this one, Broeckchen

So I wake up Christmas morning and all my colleagues are already awake, sitting in a semicircle around my bed watching me sleep. Just so everybody knows, that's not normal behaviour amongst Touched, although sometimes when they get too Taken they will just sit there and stare at people for a while, so I guess you could say it's like a very, very extreme version of normal behaviour.

Naturally, once I noticed them all sitting there I assumed they were going to kill me and flew upright in a panic, ready to defend myself to the death. Turns out they just wanted to wish me a Merry Christmas and give me some presents. So yeah, kinda awkward. Unsurprisingly, it was apparently James' idea to do so in such a manner, and he's also at least obliquely responsible for the presents I got. Or the present I got and the present I'm meant to pass on. Or the Christmas cards. I'm not really sure what they're meant to be.

If that sounds confusing then perhaps you'd like to see for yourself (I've just discovered you can directly upload pictures to a blog, by the way, so bear with me as I abuse this function): 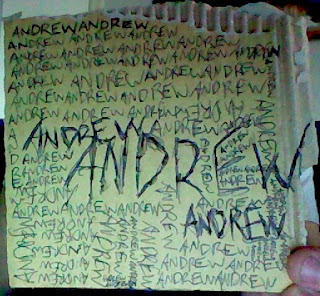 The back of my 'card', which was clearly done in case I was having trouble figuring out who it was for. 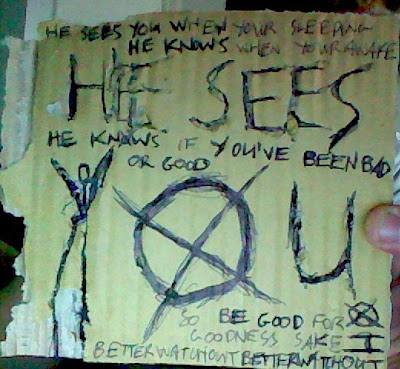 And on the front: some carols that immediately made me think of you and your Santa theory, Broeckchen. I actually laughed out loud when I read it, which the particular Taken responsible for the drawing seemed to appreciate. You all get this one a little larger, since it's kind of hard to read at the standard size. 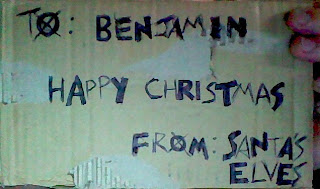 Something which I'm supposed to pass on to my brother, obviously. And yes, I know what the bold letters say. I do consider it to be obvious, but it falls short in achieving perfect, so I'm still not planning on spending time with family this Christmas, if you know what I mean. I did consider it, but a Christmas email from Ben begging me to talk to him if I'm still alive (you know, the usual stuff) and recounting his day up until lunch and when he sent the email (which was uneventful to say the least) has reassured me. I am keeping an eye out for, shall we say, the perfect gift, though. 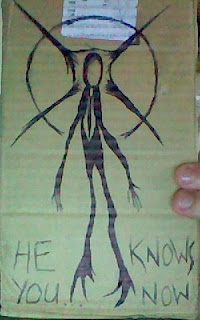 And last but not least: the back of Ben's card, which explains why I'm meant to be passing it on. I don't know what that sticker is on the cardboard, but it doesn't say anything legible and appears to have once been some sort of shipping information for the box the card was taken from, so I'm not too worried about it's significance.
All in all, it's pretty standard fare. To give you an idea, I've quite literally received coded messages from my colleagues telling me we need more milk, as surreal as that sounds. That was back when we had a working fridge, though, so I guess it's just suggestions for what I should do with my life from now on. So don't panic. I live with six Touched, three of which have been Taken - sending coded messages to each other is how they pass the time. This kind of thing wouldn't even be noteworthy if it weren't Christmas.
Speaking of, boxing day looks to be shaping up for a trip around half of fricken Australia, if James' talk about a "holy pilgrimage across our homeland when we wake tomorrow" translates as directly as it sounds it should. That would be the trip to everybody in my phone-book I mentioned, which I assumed we were going to be planning more thoroughly. It would appear I have no such luck. All I know is that if we do go I'm going to be posting a whole lot less until we get back (if we get back, I don't really know what his plan is or where he intends for us to finish up at), but I'll try to make up for it content-wise.
I'm toying with an idea to write up profiles for everybody we talk to so you can all get to know my various contacts and colleagues for a bit more insight into how our operations go, but there's a lot I'm not allowed to say that I'll have to work around, and it's not like this thing is consistent across even two separate groups, so you never know.
I guess we'll see. And before anyone asks: yes, those few shots of my fingers are all you're ever going to see of me. If you're lucky you might get more shots of my fingers at some later date while I hold up other things I want photographed. Wouldn't that be fun?
Anyway, I've got some things I need to sort out, so Merry Christmas everybody, and I hope your holidays are good. I might be back later today to chat it up in the comments, I might not. We'll see.
Posted by Andrew at 9:43 PM

Email ThisBlogThis!Share to TwitterShare to FacebookShare to Pinterest
Labels: The Boss, The Brother, The Colleagues, The Job, The Work Trip